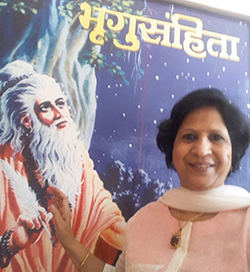 The samadhi of the great Maharashi Bhrigu is situated in Western Maharashtra at Wai, Satara District. A small village is named after him ie; Bhuinj.

Bhrigu rishi had always question in mind about life and death. If a person dies then why again he is born on the planet. During his meditation, he got the answer that a human being takes birth just due to his own karma and later he dies. Both are painful for the human being to take birth and die as well as life journey that he goes thru between birth and death.

Bhrigurishi was upset with the answer that he had received on life & birth. The next question that comes up in his mind is how to make a human being relief from the cycle of birth and death? He realized that if a human being stops his karmas (duty) then he may be relief from life/death cycle.

But it’s not practically feasible, as human being can neither stop thinking nor avoid his karma. To attend moksh (liberation from life and death cycle) was not in hand of human being. Then the question certainly raised was, what is the solution to achieve it?

Then Bhrigurishi created bhrigusamhita for the ultimate solution of getting moksh.It is very clearly mentioned in the bhrigusamhita, that if a person does all kind of satvik/pure karma than he can master his destiny as per his choice.Hardwordk and good deeds are only two sutra that one can get as a summary of Bhrigusamhita.

For Moksh, third sutra that has been derived from Bhrigusamhita was recitation/chanting of holy words – such as “Ram Ram” “Radha Krishna” whenever a person his free of his any work. Even chanting Gods name at the time of death also leads to Moksh.

Major problems in life such as – premature death, pitru dosh, black magic, health problem can be ward off thru regular chanting of “Mahamritunjay mantra” is mentioned as a part of remedy in Bhrigusamhita.

Second mantra, which is emphasized “Gayatri Mantra” which helps is eradicating Vastu dosh and pitru dosh and other physical body pain element.

Other things that are given as remedy is charity. This is explained in a very simple way in Bhrigusamhita which eradicates all ancestor dosh karma from from our life.

In charity, gold is considered to ward off all the problems and food charity for all kind of obstacles.